​Since opening in 2005, I have helped thousands of clients recover from injury and get back to what they love doing without pain. I have all types of clients, from sporting stars to weekend warriors, from tradies to office workers, children, mums and dads. 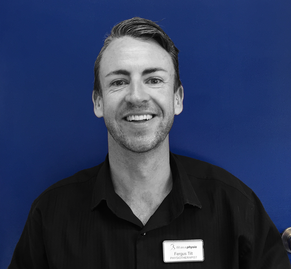 I'm originally from Launceston, Tasmania.  I came to Sydney in 1994 to study a Bachelor of Applied Science (Physiotherapy) at The University of Sydney. After graduating I worked for three years at Royal Prince Alfred Hospital, which was a great learning opportunity, rotating through all the different areas that physios work in, and it's where I met my wife who was a nurse on one of the wards.

In 2001 I started at Mosman Private Hospital as the contracted physiotherapist & visited there daily until 2010.

In 2003 I opened a boutique physiotherapy practice in Mosman, Fit As A Physio.

Pursuing a personal & professional love of sport, I completed a Graduate Certificate in Sports Physiotherapy in 2012, and a Master of Sports Physiotherapy at La Trobe University in 2013.  As part of the course work I was at the Sydney Swans, which was a great opportunity to work with elite sport and get to know the players,  & then the Australian Rugby Union Academy, working with the Australian Sevens & Australian Under 20's rugby players.

I've been the physio for Mosman Rugby Club  since 2003, looking after six Grade teams and an U-21 Colts team who compete in Division One of the NSW Suburban Rugby competition.

As an adjunct to the physiotherapy clinical work, my wife & I developed FIT-TAPE, a type of Kinesiology Tape, that is available online at fit-tape.com.au

I love professional development & staying on top of the latest evidenced-based practise. I get a bit too excited talking about "load" & "tendons" & other physio-nerd stuff.  But, I wouldn't call myself a physio's physio.  I think a lot of physios over-complicate their approach and confuse their patients.  It's important to me that you understand what I'm talking about.  Some physios will give you twenty exercises to do at home.  I'll simplify things to concentrate on the most important one or two. Bang for your buck. 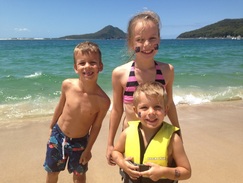 My wife's name is Annika, & our three children are Lily, Lachlan, & Josh.  We live in Carlingford, near where Annika grew up.

Weekends are filled with road cycling, helping out on the committee of our kids' Little Athletics club, & on the sideline of the kids' soccer / netball / futsal / athletics.